Ho Young Lee was a guest speaker at the Korea Institute of Toxicology (KIT) Guest Presentation in Daejeon, South Korea. He presented his research on his recently published work on co-exposure inhalation in mice to PFAS and carbon black nanoparticles. Congratulations Ho Young on representing the Bonner Lab internationally!

Logan Tisch and Ryan Bartone, first year doctoral students in the Toxicology Program, joined the Bonner Lab in January and are working on pulmonary innate immune responses to engineered nanoparticles and interactions with inhaled allergens. Welcome Logan and Ryan!

Dorothy You graduated from NC State University with her PhD in Toxicology and is now working as a Postdoctoral Fellow at the University of California at Davis. Congrats, Dorothy! 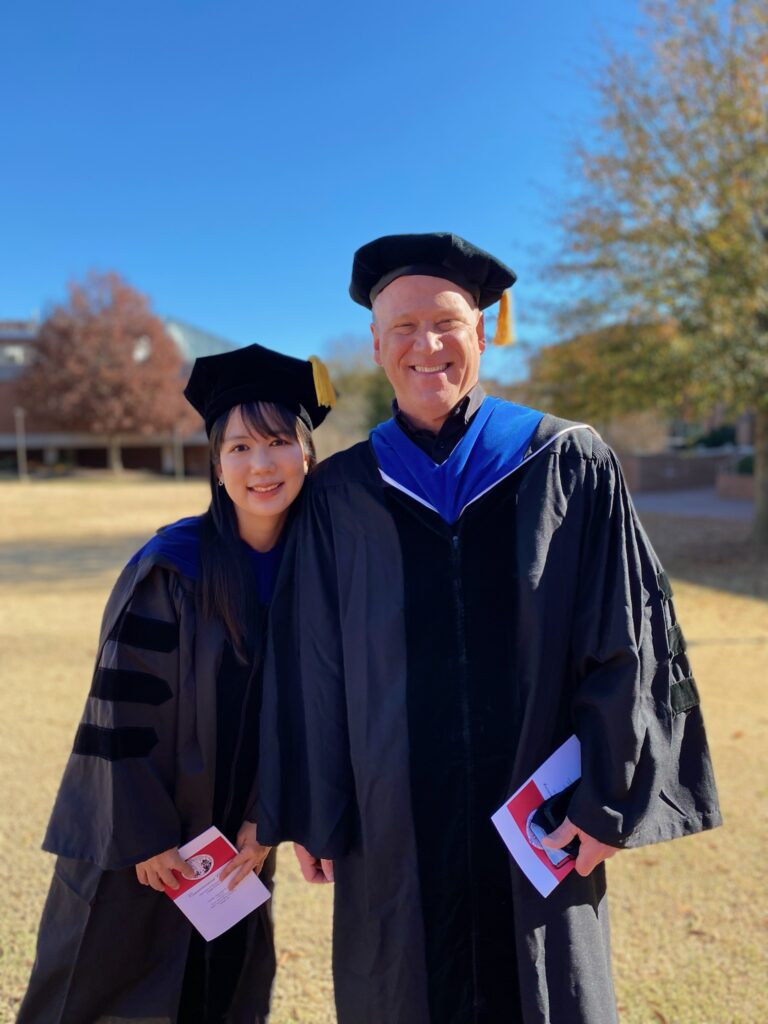 Congratulations to Jamie Bonner and colleagues on being awarded a $2.25M grant funded by the National Institute of Environmental Health Sciences (NIEHS) to study mechanisms of nanoparticle-allergen interactions that mediate exacerbation of allergic lung disease in mice. The proposed research aims to evaluate how carbon nanotubes, a prototypical engineered nanoparticle, modify the immunogenicity of house dust mite allergens in the lung through the formation of a nanoparticle-allergen corona that is proposed to enhance cell signaling via the protease-activated receptor 2 (PAR2). The work involves co-investigators at Duke University and UNC Chapel Hill with expertise in nanoparticle-corona biochemistry and PAR2 transgenic mouse models. The research will have broad implications for understanding fundamental mechanisms that mediate exacerbation of asthma in humans by ultrafine air pollution particles, as well as emerging engineered nanoparticles.

Dorothy You successfully defended her dissertation and has accepted at postdoctoral position at the University of California at Davis. Congrats, Dorothy!

Dorothy You won ‘Best Publication of the Year’ award in the Nanoscience and Advanced Materials Specialty Section (NAMSS) at the 2021 Society of Toxicology annual conference for her paper published in Nanotoxicology entitled “Sex Differences in the Acute and Subchronic Lung Inflammatory Responses of Mice to Nickel Nanoparticles“. Congrats, Dorothy!

Ho Young Lee will participate in a SOT webinar for the Nanoscience and Advanced Materials Specialty Section (NAMSS) on October 21st at 1pm. His talk is entitled:

“Pulmonary Exposure of Mice to Perfluoro-2-Propoxy Propanoic Acid (GENX) Transforms Alveolar Macrophages from a Pro-inflammatory Phenotype to a Proliferative Phenotype”.

Ho Young Lee was a finalist invited speaker at the NC SOT conference and presented his research on the pulmonary effects of Perfluoro-2-Propoxy Propanoic Acid (GenX). Congratulations, Ho Young!

Dorothy published a peer-reviewed article in Nanotoxicology entitled “Sex Differences in the Acute and Subchronic Lung Inflammatory Responses of Mice to Nickel Nanoparticles“. This is an excellent paper that identified mechanisms of susceptibility of male mice to engineered nanoparticles. Great work, Dorothy!

Dana Sheinhaus was awarded an Undergraduate Research Award for Fall 2020 for her proposal entitled “Effects of Perfluoroalkyl Substances on the Pulmonary Immune Response of Macrophages to Microbial Infection”. This award provides funding for Dana’s research in the Bonner Lab. Congratulations Dana! and thank you for supporting our research!

Dorothy You won the Society of Toxicology (SOT) Nanoscience and Advanced Materials (NAMSS) Outstanding Graduate Student Award Second Place. She was also the recipient of the SOT Endowment Award Young Soo Choi Student Scholarship. Dorothy also serves as the Graduate Student Representative for NAMSS. Congratulations Dorothy, for all of your achievements in the SOT!

Congratulations to Dorothy You for getting selected to give a platform presentation at the North Carolina Society of Toxicology (NCSOT) conference on October 7th in Research Triangle Park on her research topic “Sex Differences in Acute and Chronic Inflammatory Responses to Nickel Nanoparticles”. Dorothy also gave a talk on this topic to the NC State Toxicology Program Seminar Series on October 24th. 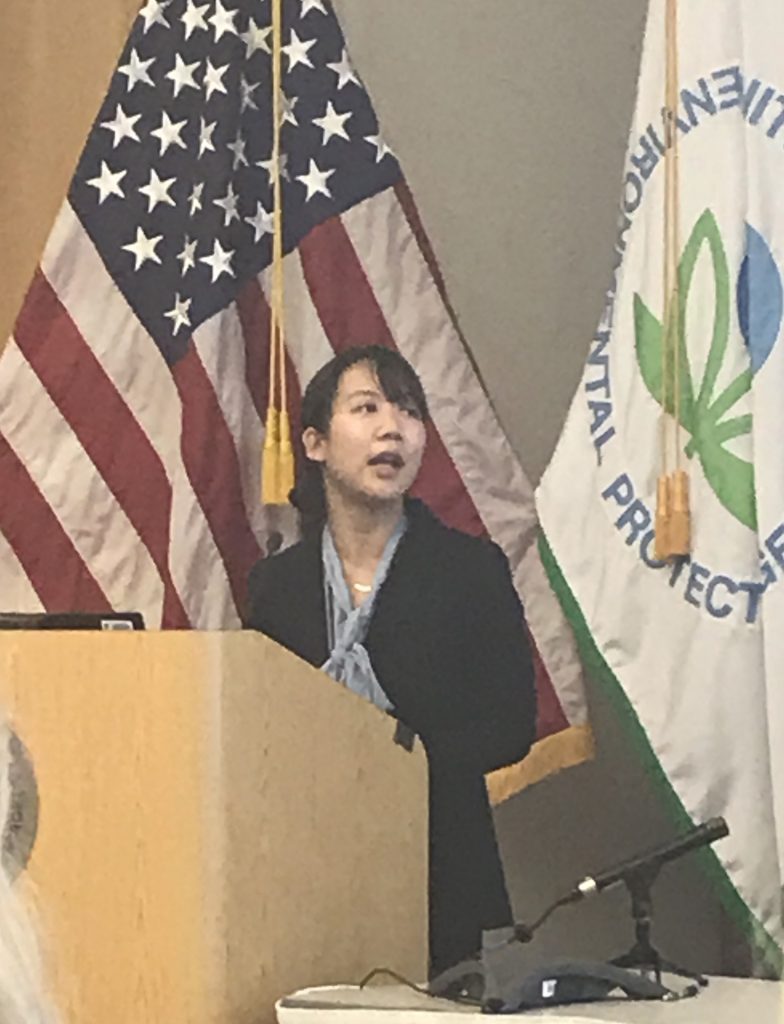 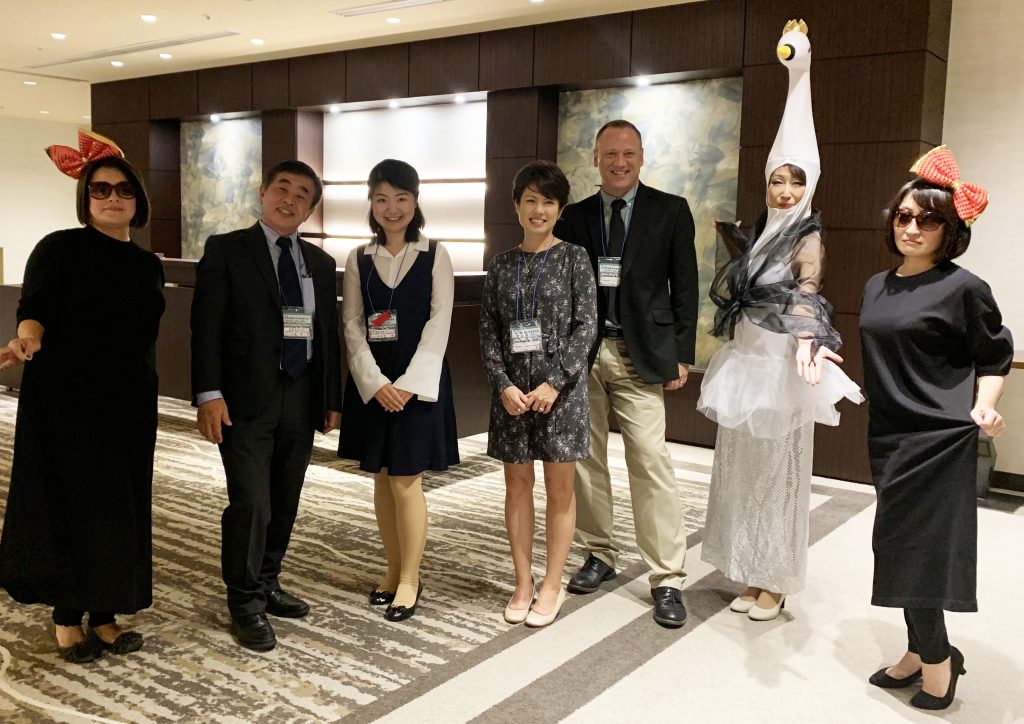 Congratulations to Dorothy You from the Bonner Lab for winning 2nd place in the Predoctoral Poster Presentation competition at the Annual Visiting Pulmonary Scholar Research Symposium held at UNC Chapel Hill on May 9th, 2019 for her work on ‘Sex differences in pulmonary inflammatory response of mice to nickel nanoparticles’. This was a competition between graduate students from UNC-CH, Duke University, ECU and NCSU.

Members of the Bonner Lab (Dorothy You, Ho Young Lee, and Dr. B) attended the 2019 Society of Toxicology Conference in Baltimore, MD. Dorothy presented her poster on ‘sex-specific lung inflammatory responses to nickel nanoparticles’ and Ho Young presented his poster on ‘macrophage pro-inflammatory responses to functionalized carbon nanotubes’ as part of the International Collaboration on Nanotube Safety (ICONS) project. 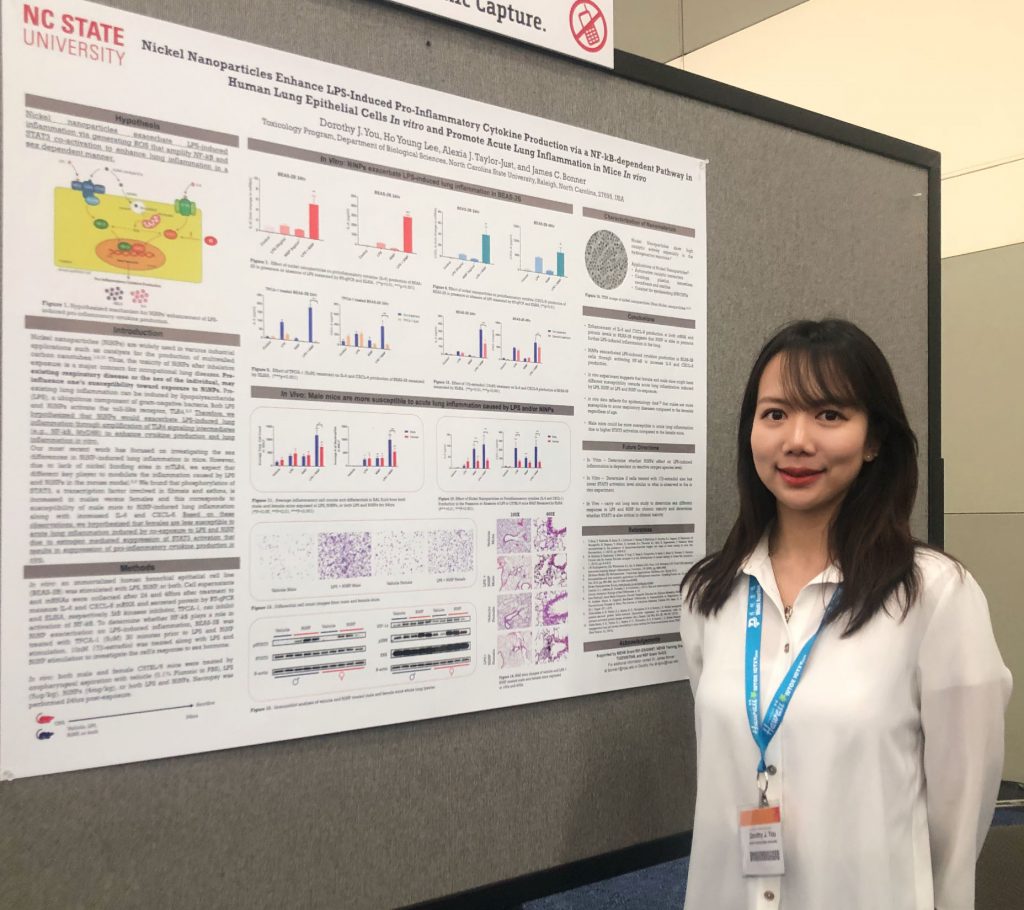 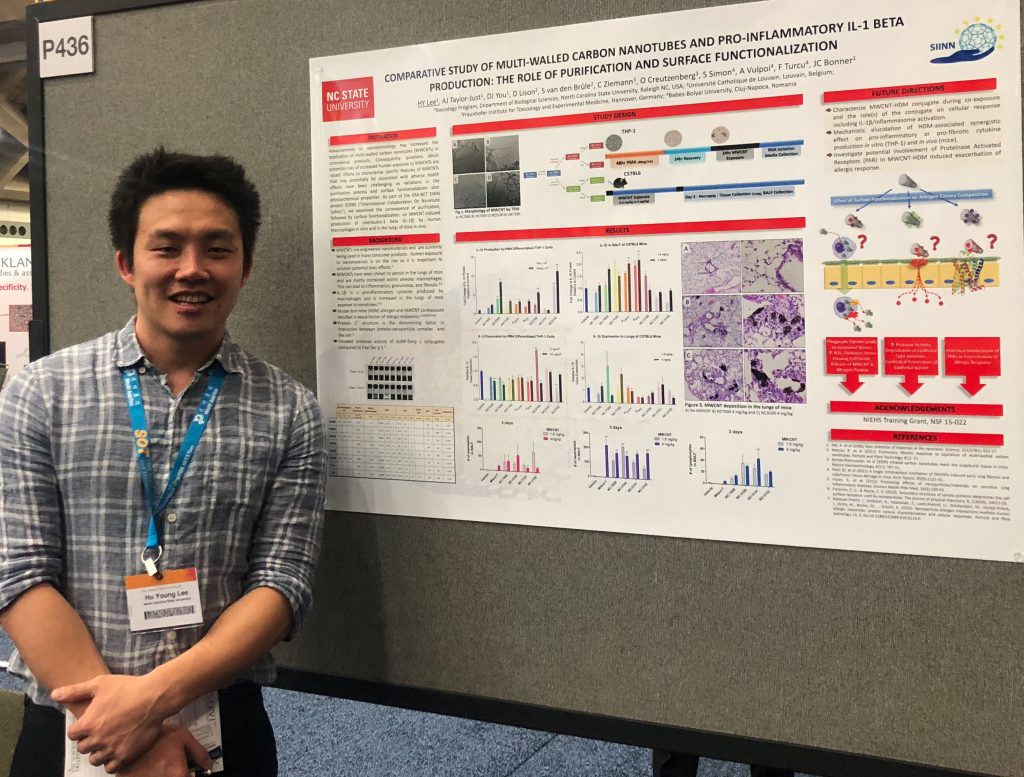 Dorothy You was elected as the Graduate Student Representative for the Nanoscience and Advanced Materials Specialty Section in the Society of Toxicology (formerly called the Nanotoxicology Specialty Section). Congratulations Dorothy! 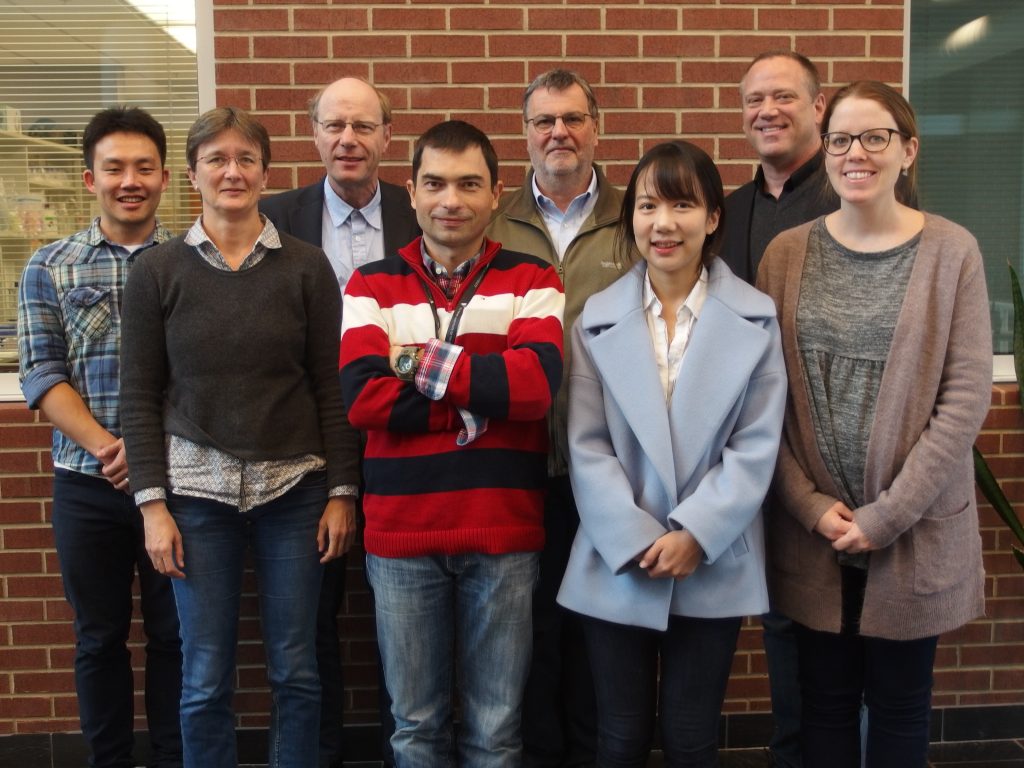 Members of the Bonner Lab attended the 2018 Society of Toxicology (SOT) annual conference in San Antonio, TX. Poster presentations were made by Dorothy, Sreeja, Lexie and Mark. Mark and Sreeja won travel awards. Also, Mark as the Graduate Representative for the Nanotoxicology Specialty Section. Nice job, everyone!

Ho Young Lee joined the Bonner Lab in January of 2018 as a PhD graduate student in the Toxicology program. Welcome Ho Young!

Katie Duke graduated in December, 2017 with her PhD in Toxicology. Congratulations, Katie! 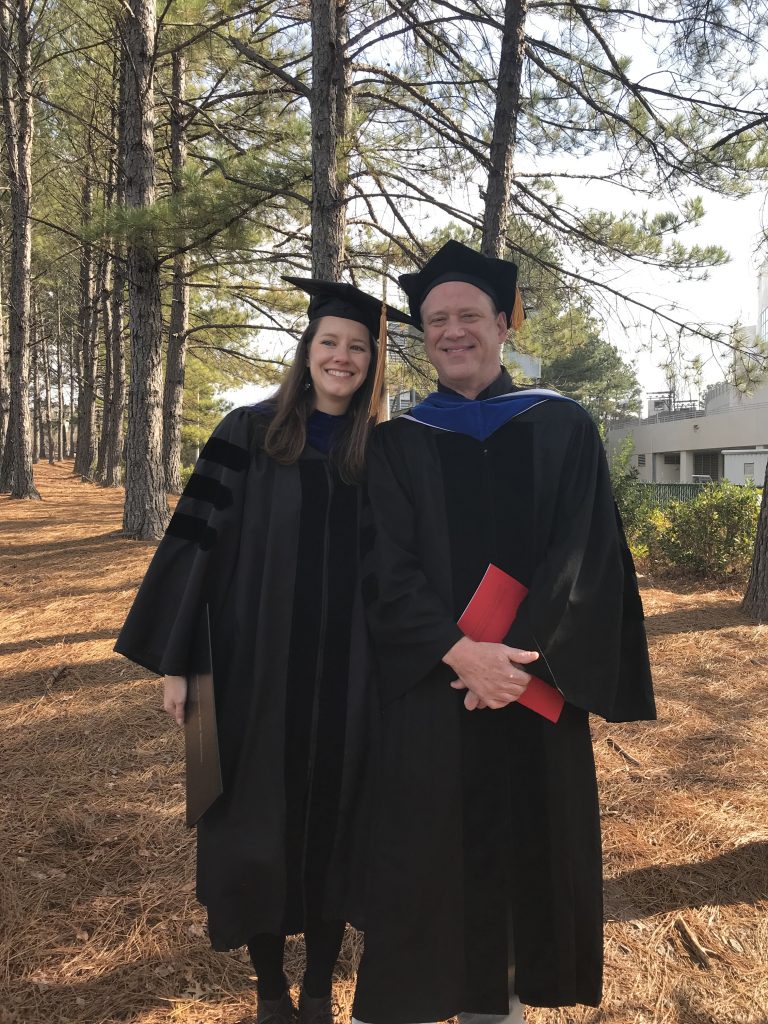 Sreeja Sridharan was selected to present her research entitled “Cytokine Production by Rat Mesothelial Cells Exposed to Carbon Nanotubes Functionalized by Atomic Layer Deposition (ALD) Coating as a Means of Assessing Risk for Mesothelioma,” at the National Council of Undergraduate Research (NCUR 31) conference at the University of Memphis TN in April 2017. Congratulations Sreeja!

Dorothy You  joined the Bonner Lab in January of 2017 as PhD graduate student in the Toxicology Program. Welcome Dorothy!

Jamie Bonner joined colleagues at Babes-Boylai University in Cluj-Napoca, Romania for the International Collaboration on Nanotube Safety (ICONS) workshop, which is a joint U.S.-European scientific investigative venture and part of the Sustainable Initiative for Innovative Nanoscience and Nanosafety (SIINN) program. 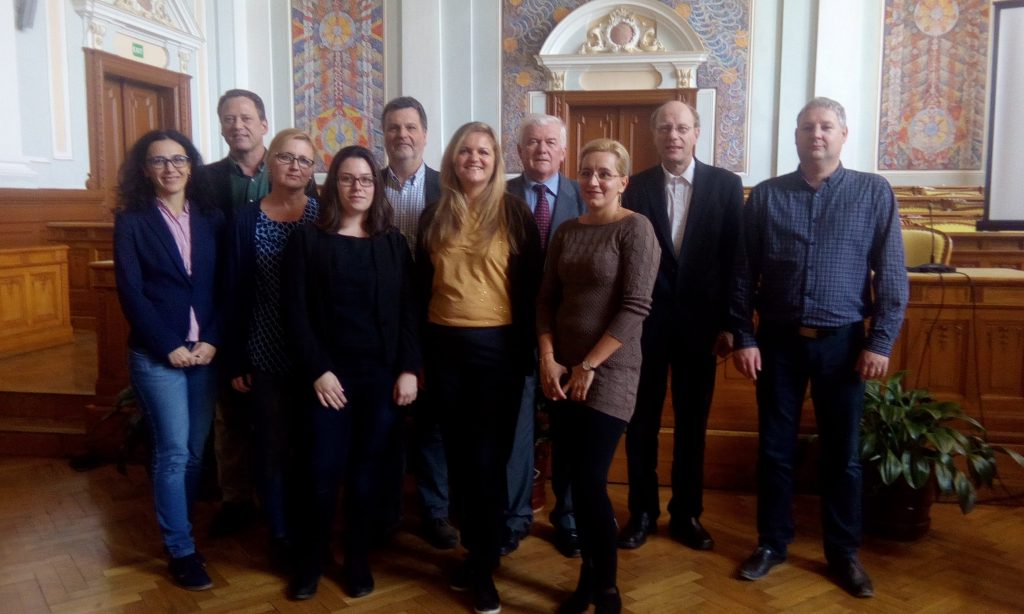 The Bonner Lab crew travels to the International Nanotoxicology Congress in Boston, MA to present their work and catch up on some history. Katie Duke from the Bonner Lab and Gina Hilton from the Michael Bereman Lab at NCSU win travel awards and Gina wins a best poster award. Congrats to Katie and Gina!

The Bonner Lab crew travels to the Society of Toxicology Annual Conference in New Orleans, LA to present their work and spend some time in the Big Easy. Lexie joins Bonner lab graduates Kelly and Ellen below to enjoy a cafe’ au lait and beignet at Café du Monde in the French Quarter. 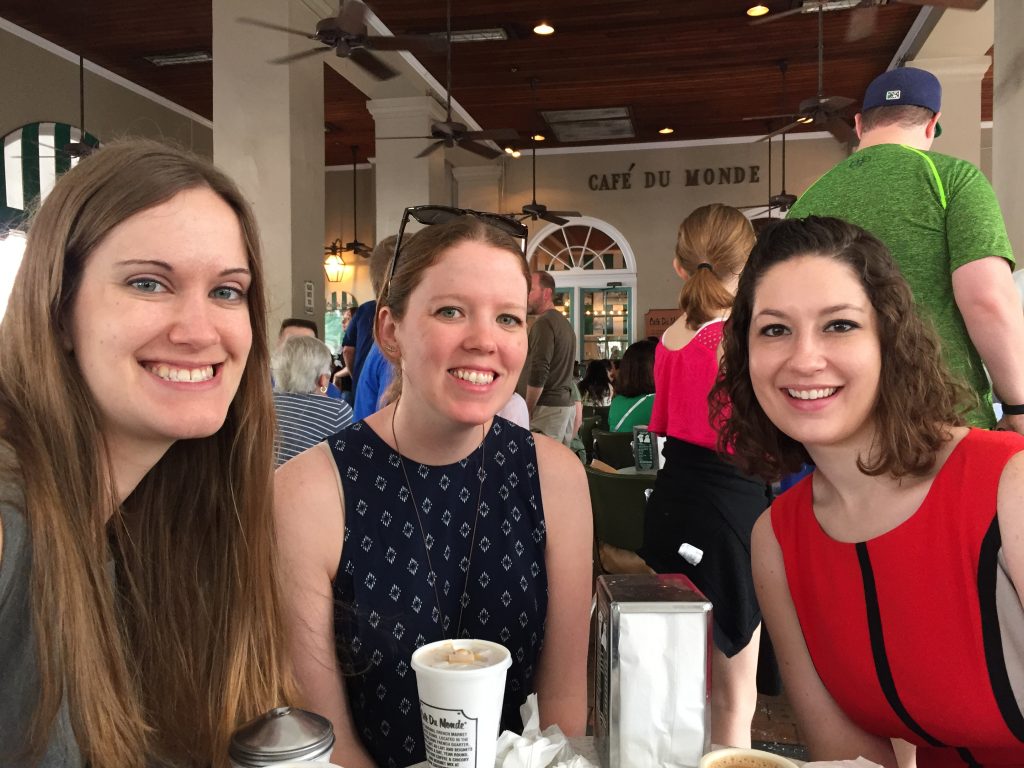 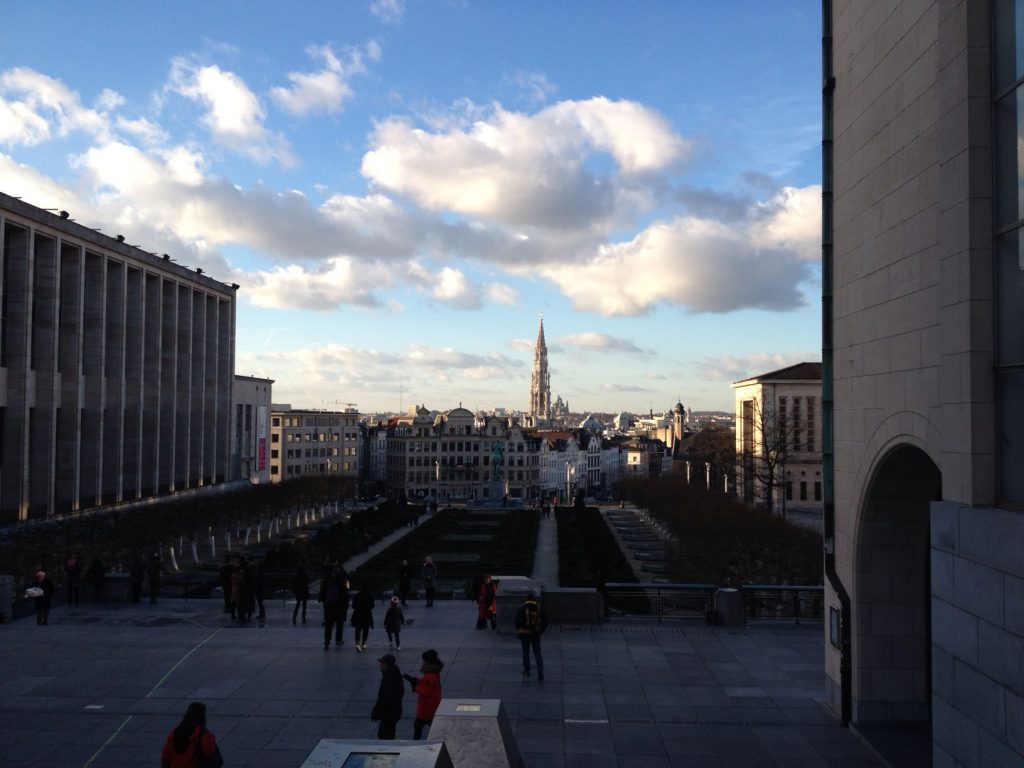 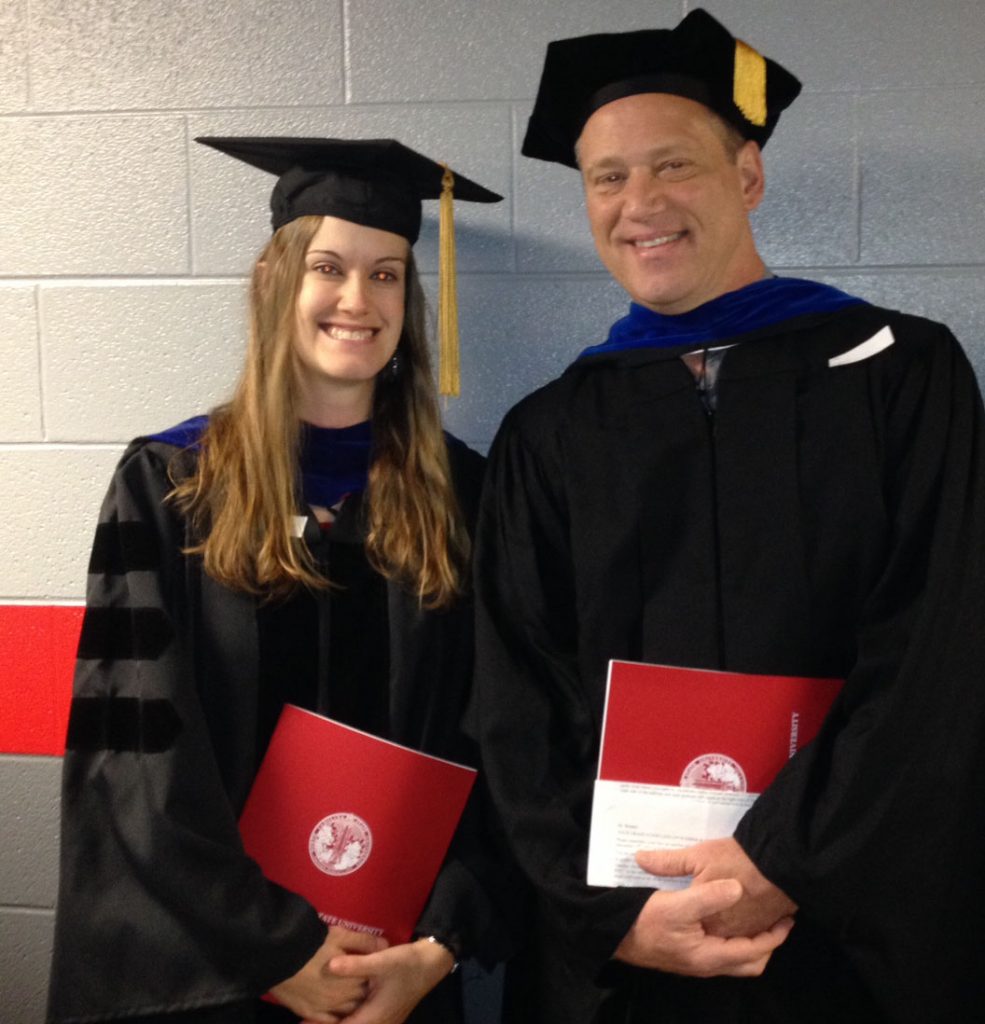 Jamie Bonner served as the U.S. delegate for The World Health Organization (WHO) Workshop on the Immunotoxicity of Nanomaterials, held in Bilthoven, Netherlands, along with delegates representing the Netherlands, Finland, Sweden, France, Canada, Mexico, Singapore, Republic of Korea, and Japan. The workshop was hosted by Professor Henk van Loveren of the National Institute for Public Health and the Environment(RIVM). 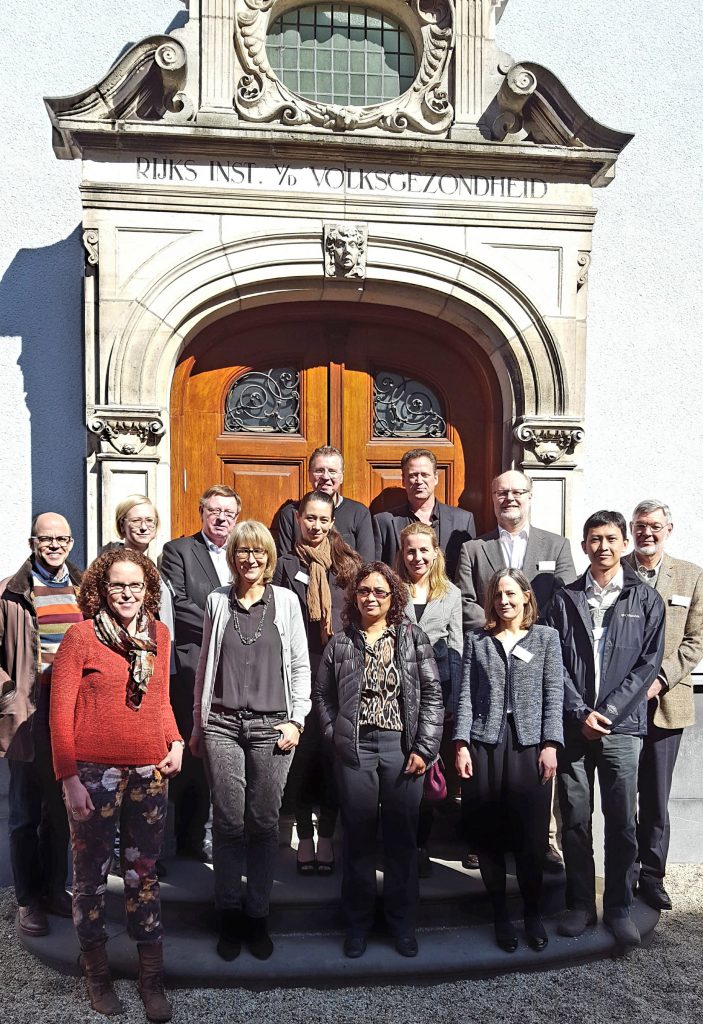 Jamie Bonner was a guest on Radio In Vivo hosted by Ernie Hood to talk about Nanomaterials Health and Safety.

Jamie Bonner was hosted by Dr. Andrij Holian at the University of Montana at Missoula, MT and gave a talk on ‘Predicting the Impact of Engineered Nanomaterials on Lung Disease’. Kelly Shipkowski, Lexie Taylor and Elizabeth Thompson presented their research findings in a poster session entitled, “Nanotoxicology: General & Carbon based”. Kelly Shipkowski was awarded a travel grant to present her research at SOT 2014.

Elizabeth, Ellen, and Kelly take a desert hike after posters at SOT2014 Phoenix. 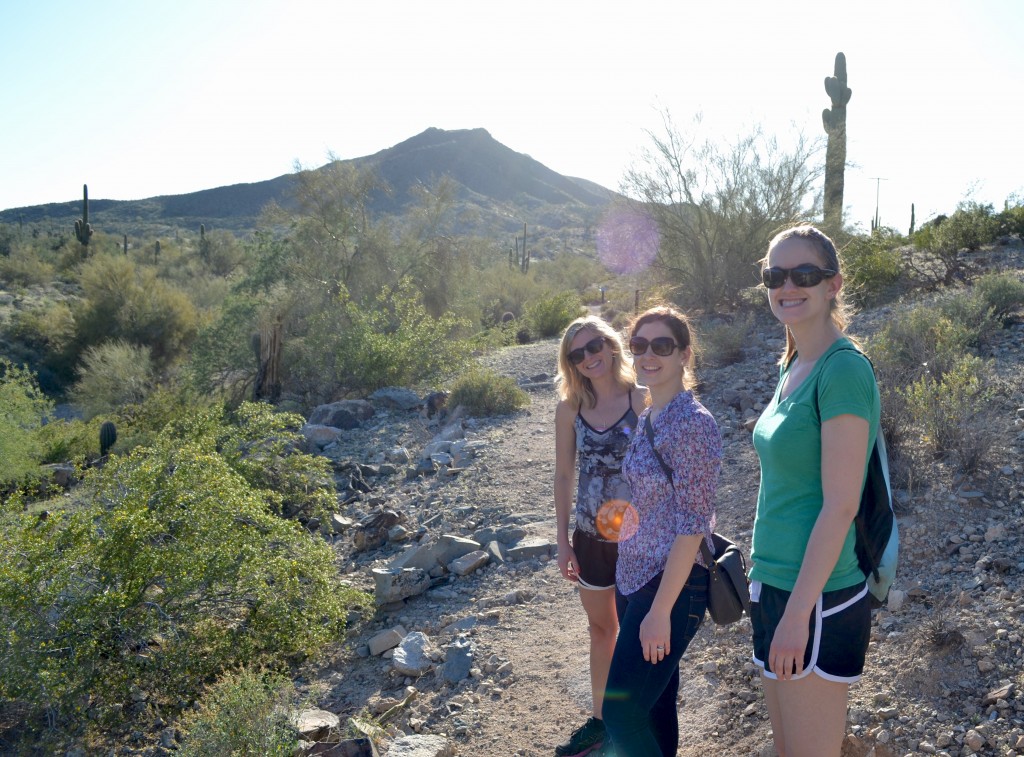 February 2014: Jamie Bonner was hosted by Dr. Philip Demokritou as an invited speaker for the Nano Seminar Series at The Center for Nanotechnology and Nanotoxicology at Harvard School of Public Health, Boston, MA. Dr. Bonner was invited to Oslo, Norway as part of an international panel of scientists to discuss the risks and advantages of nanomaterials.  Information discussed at the “Workshop on Nanomaterials and Possible Adverse Health Effects”, organized by Olav Breen of If P&C Insurance, Oslo and Professor David Christiani, Harvard School of Public Health,  is summarized in the article, “Insurance firm ponders nanoparticle risks“. September 2013: Dr. Bonner was an invited speaker at EuroTox2013 in Interlaken Switzerland. 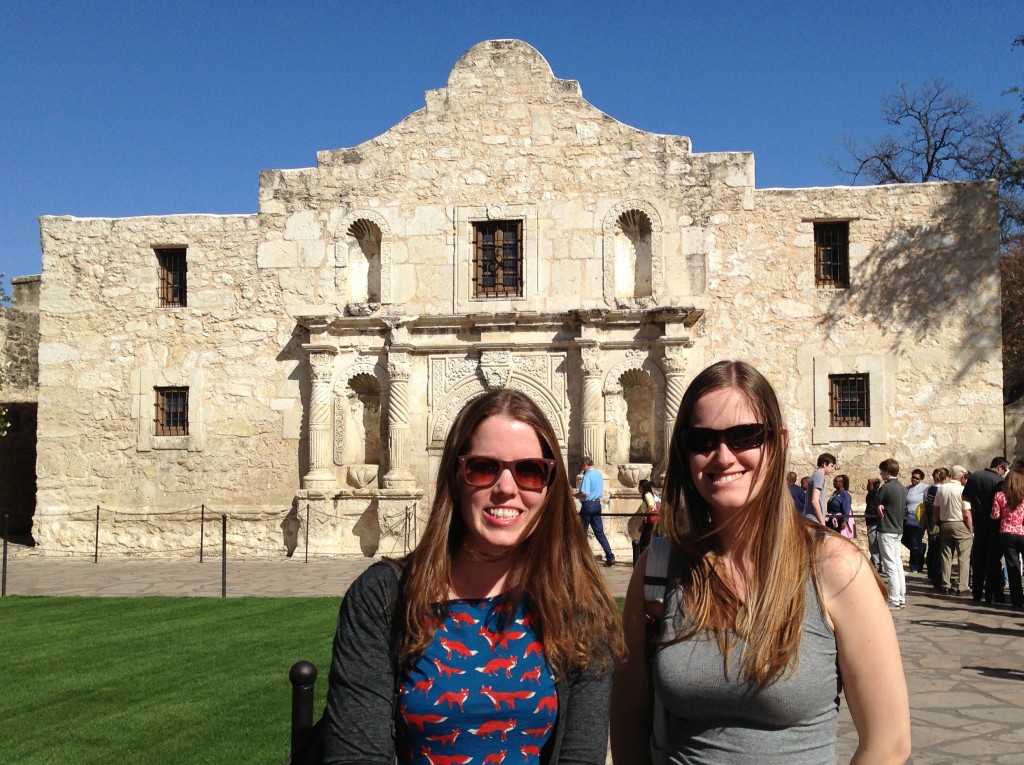 Cambridge University Press and Amazon released a book entitled ”The Toxicology of Carbon Nanotubes” co-edited by Dr. Bonner and his colleagues in the UK – Professor Ken Donaldson  and Dr. Rodger Duffin from the University of Edinburgh, along with Dr. Craig Poland from the Institute of Occupational Medicine. April 2012: Dr. Elizabeth Thompson presented her work on “The role of STAT1 Transcription Factor Signaling in allergic airway disease induced by carbon nanotubes” at the Annual NCSU Postdoc Symposium hosted by the Office of Postdoctoral Affairs. Elizabeth also delivered a  talk on this topic in March of 2012 at the regional Visiting Pulmonary Scholar Program held at the Friday Center at the University of North Carolina, Chapel Hill.